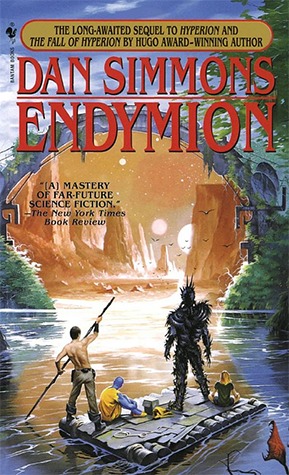 I’m going to do book reviews on this blog to add a bit of variety. Don’t worry, I am a slow reader and finish a new book only once a month, give or take. I am a huge Fantasy/Sci-Fi fan, so that is what they will mostly consist of. I still have yet to complete the ‘all-time’ greats for each genre, so maybe you have already read the books I review and would like to see my opinion, or maybe you are looking for a new book to try and have considered the ones I show. My reviews will not be long, and I promise, NO SPOILERS! I dislike spoilers with a passion. Anyway, here goes:

Endymion is book three in The Hyperion Cantos. The first two books, Hyperion and Fall of Hyperion are fantastic, definite 5 star novels and tied in first for my favourite series in the sci-fi genre. I highly recommend you read them whether you are a big sci-fi person or not. The use of different writing styles in the first book to tell the characters’ stories is phenomenal, and in book two it is not cliché to say you really have NO CLUE what will happen next. The use of horror adds another interesting element (which Dan Simmons is well-known for), especially from the Shrike character who is fantastically creepy. Simmons’ far-future world also has a special atmosphere of poetic beauty that makes it unique from other science-fiction works.

Endymion begins a new story after a time-gap of some 500+ years after the events of books one and two. While they are tied to the first two books, which themselves left many unanswered questions, they can stand on their own.

1. Half the book was in a first-person narrative, and the other half was written with present tense. The present tense was done very well, and you learn why it is appropriately used. The character involved with the present tense was great and the writing style did not impede the story at all. But I am not a huge fan of first-person narrative. First of all, I feel like you have to like the main character because they’re the one talking you through everything, and 9.5 times out of 10 the main character does not even make my top five favourites in a story. Second, you know right off the get-go that the character is going to make it out of every close situation, otherwise the story would end. In addition, first-person tends to mean less dialogue and more descriptions, making for a long read (I am already a slow reader, haha). Now, that is all just my personal preference, and I do love some first-person books. Lastly, my dislike of it here was mostly from the fact that it was only used minimally in books 1 and 2, so it was a bit of an odd switch.

2. It just wasn’t as great as the first two books. This one had a spiritual atmosphere to it where the others were serious and intense. The book also had a more ‘local’ feel (as opposed to epic). The plot style was reminiscent of Isaac Asimov‘s Foundation and Earth (Foundation Novel #5), whereby the characters journey from one world to the next, with a mini-adventure at each. Finally, I also preferred the greater variety in the set of characters found in the two Hyperion novels.

1. Some of the mysteries left after book 2 were solved, and there are plenty of more mysteries remaining. I will definitely be finishing the series right away as I am dying to find out answers to my questions. That is one thing that can really keep me going in a lot of book series, and sometimes the answers I am looking for are different than what other people seem to care most about. Such as in A Song of Ice and Fire, I have been waiting since the very first prologue for the Others to play a larger role and to find out who they really are, almost to the point where even though I am in love with that story, it could be a deal-breaker. INVADE ALREADY!

2. Although I would not say the main characters were anywhere near my general list of favourites, I did want to see them all make it to the end, and the character De Soya really grew on me.

Next Book: Rise of Endymion (Hyperion Cantos #4), by Dan Simmons